EUAbout attends… “Investing in climate action: The Make or-Break Decade” by Project Syndicate in partner with EIB and EC 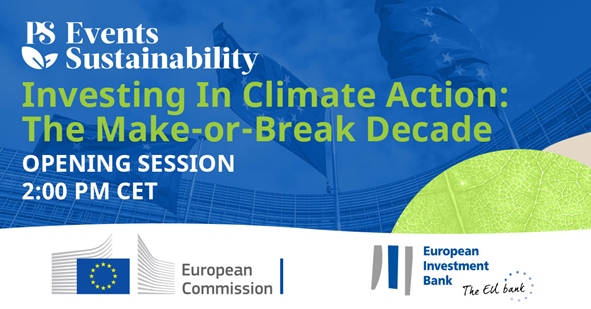 On March 24, the online event “Investing in climate action: The Make or-Break Decade”, sponsored by Project Syndicate in partner with the European Investment Bank and the European Commission took place.

The webinar opened with the speeches of the President of the EC, Ursula Von der Leyen and the President of the EIB, Werner Hoyer, who stressed on the need to take action to reduce GHG emissions, to reach carbon neutrality by 2030 and to challenge climate change in the field of the European Green Deal, as Europe is willing to become a global leader, in cooperation with third countries, to foster more sustainable policies. While, the Executive Vice-president of EC, Valdis Dombrovskis, stressed on the implementation of stronger disclosures for financing and institutions.

The first session of the webinar, “Getting our hands green” has seen a discussion on the measures that policy-makers and institutions might implement to achieve the Green Deal goals and on whether Europe will be able to raise this major challenge of climate change. The speakers who intervened were the Minister of Environment of Portugal, João Pedro Matos Fernandes; Mauro Petriccione, Director-General for Climate Action at the EC; Samantha Smith, Director of the Just Transition Centre of the International Trade Union Confederation; Ma’ Jun, China’s Green Finance Committee and Christopher Hurst, Director-General of the Projects Directorate of EIB. They agreed on the necessity to put all efforts and resources needed to reduce at least 5% of emissions by 2030, by investing in the environment, people and business, in order to support green transition through an international cooperation and alignment with third countries, such as Africa.

During the second session of the event, “A new green boom”, Oliver Bäte, Chairman of the Board of Management of Allianz SE; Teresa Czerwińska, Vice President of the European Investment Bank; Irene Tinagli , Chair of the Committee on Economic and Monetary Affairs for the European Parliament; Maarten Verwey, Director-General of Economic and Financial Affairs for the European Commission; and Fiona Reynolds, Chief Executive Officer of the Principles for Responsible Investment, took part of a wide debate on the impacts of climate change on finance and politics.

The European Commission and the European Investment Bank have both made climate action their top priority. The European Commission launched the European Green Deal in December 2019 as Europe’s new growth strategy. It is designed to transform the EU into a fair and prosperous society, with a modern, resource-efficient and competitive economy where there are no net emissions of greenhouse gases in 2050. In parallel, the European Investment Bank, the world’s largest multilateral lender, has transitioned into the EU climate bank to support the European Green Deal, aligning all its activities with the Paris Agreement and committing to support €1 trillion of investments in climate action and environmental sustainability in the critical decade ahead. In 2019, the bank also took the groundbreaking decision to end its financing for traditional fossil-fuel energy projects.The speech by Christine Lagarde, President of the European Central Bank (ECB), clarifies the position of the ECB: “Climate change is one of the biggest economic risks confronting the EU this century. Advertising this catastrophic outcome requires changing how we produce, how we work and how we live. Climate change is the focus of many strands of work currently underway across the European Central Bank. I believe the necessary steps are clear and progress has already begun.”

Finally, the discussion grappled with the concept of “climate winners and losers” and asked to what extent policy responses in the making, such as the European Green Deal and the EU Climate Law, address this and pave the way for an inclusive transition to a zero carbon future.